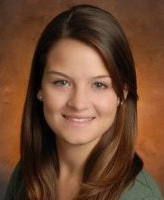 When senior economics major and peace studies major Melissa Maggart began looking for a summer internship last year, she sought to combine her academic interests with her personal desire to help alleviate poverty. Her search brought her to a new program at the University of Notre Dame—the Lab for Economic Opportunities (LEO).

“I looked for positions with Catholic Charities,” she says, “and this just happened to be a perfect combination of nonprofit work with my economics background.” 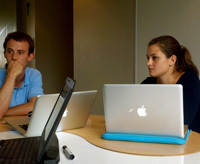 Maggart’s role was to analyze the demographics of the areas served by WIC stores. Using specialized GIS software, Maggart’s research documented that the areas served by the stores were some of the poorest in Chicago. “Obviously, the WIC program has been in Chicago for a long time so they had a good idea of where the stores should be placed, but having that quantitative support is helpful for promoting the project and justifying why they chose those locations,” she says.

Her research will be a component of a larger, ongoing LEO project to determine whether redemption rates of WIC coupons are higher among recipients served by WIC stores and whether this program improves health outcomes for recipients. The ultimate goal of the project is to determine whether the WIC-store model should be used in other parts of the country.

Maggart’s adviser was William Evans, Keough-Hesburgh Professor of Economics and co-founder of LEO.

“Melissa came into her project at LEO during an exciting but challenging time,” Evans says. “We were just getting LEO off the ground, and we were asking a lot from the undergraduates. But Melissa’s paper is a good indication of the type of high-quality and serious academic research our economics majors can produce.”

Her work on the project was also supported by a grant from the Undergraduate Research Opportunity Program in the College of Arts and Letters’ Institute for Scholarship in the Liberal Arts.

“Living here over the summer was a huge financial burden,” Maggart says. “It would have been very difficult if I hadn’t had help from UROP.” 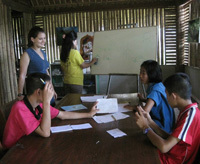 Maggart’s focus on poverty is rooted in her experiences living in a number of countries around the world. She grew up in Tokyo and has traveled across most of Southeast Asia. In the summer following her sophomore year, she participated in a Kellogg Institute for International Studies internship in Thailand, where she taught English at a school in an elephant camp. Maggart also studied abroad in Freemantle, Australia.

“I’m interested in anti-poverty initiatives and peace studies because those are the issues I’ve been exposed to growing up in Japan and traveling abroad,” she says. “At Notre Dame, I’ve been developing all these skills in data analysis and econometrics, but I wasn’t sure how that could fit into my interest in poverty. The LEO internship was perfect—it led me to doing research to impact policy.”

Her summer UROP experience has also informed her decision to pursue a job in research after graduation; Maggart is currently looking into positions at policy institutes and think tanks.

“One of the greatest things about being a student at Notre Dame is that there are so many opportunities to pursue the things you’re interested in and even things you might not have known were out there,” Maggart says. “Notre Dame does a really good job of letting you explore.”

Originally published by Jonathan Warren at al.nd.edu on April 11, 2013.