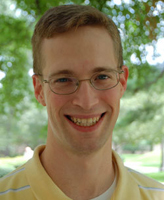 By many different measures, people who take religion seriously are different from the rest of society, says University of Notre Dame economist Daniel Hungerman. And different in a good way.

“In fact, religiosity is the best predictor of any number of positive social outcomes,” he says. “Religious people are generally healthier, they give more to charities, they are much more likely to be involved in civic life, and they are much less likely to suffer from depression or mental illness.”

Is there something about going to church that “makes you a better person,” Hungerman asks, or are people who already tend to be more involved in their communities and take care of their mental and physical health coincidentally more likely to be churchgoers?

Recently named the Stepan Family Associate Professor of Economics in the College of Arts and Letters, Hungerman says his appointment signals that Notre Dame is “a place where this kind of research, studying the impact of religiosity, is valued by the University community.”

His work in the Department of Economics has also included headline-grabbing research on the reasons behind the diminished socioeconomic outcomes of babies born in winter (co-authored with Assistant Professor Kasey Buckles) and the connection between the national erosion of “blue laws”—limits on Sunday retail sales—and increased drinking and drug use among young Americans.

But what interests Hungerman most, he says, is examining the importance that faith and participation in a faith community play in personal and civic life. It’s a niche within the broader discipline of economics that is often overlooked.

“There aren’t a lot of economists who study religion,” he notes. “That means that there are a lot of subjects that are not getting attention out there, and that’s really exciting to me.”

In November 2011, Hungerman, who is also a research associate at the National Bureau of Economic Research, published a study through that organization called “Substitution and Stigma: Evidence on Religious Competition From the Catholic Sex-Abuse Scandal.” The research showed that the scandal led to a drop of 2 million in the Catholic population and generated more than $3 billion in donations to non-Catholic faiths.

“Over time, the scandal led to a rise in both religious non-affiliation and participation in non-Catholic traditions,” he says.

In his latest research, Hungerman has been looking at the connection between education and individual religiosity in adulthood, testing the assumption that people with more education will follow global trends toward greater secularization.

He chose to examine Canada’s census in part because it included questions about religion absent from the U.S. Census survey. More importantly, during the 1950s various Canadian provinces abruptly extended requirements for compulsory education to include high school attendance. That kind of shift is a statistician’s dream, Hungerman explains. The data sets could be drawn from an identical population, meaning the extra years of education would become the only significant variable in the survey participants’ background.

Based on his analysis of the Canadian Census, Hungerman says there does appear to be a correlation between an extra year or two of schooling and a diminished long-term interest in religion: An additional year of education led to a decline of four percentage points in the likelihood that an individual identifies with any religious tradition as an adult.

The estimates suggest that increases in schooling can explain most of the rise in non-affiliation in Canada in recent decades—and presumably at least in part a corresponding impact in the United States, he says.

Hungerman calls the drop-off effect on religion an “unintended consequence” of a generally positive trend toward longer educations. “The results were somewhat disheartening,” he says, “especially for someone who teaches at a Catholic university.”

But while the findings may be cause for concern to church leaders and executive officers at religious charities, he says, even bad news is useful when it comes to strategic planning. Being aware of the connection between education and faith, Hungerman says, “may help us understand the changing landscape for religious institutions in the future.”