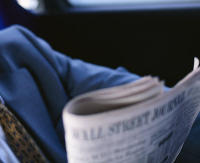 In recent years, research by the faculty of Notre Dame's Department of Economics has captured attention beyond the world of higher education, sparking public policy discussions on issues from health care and education to social justice.

That’s just as it should be, says Richard Jensen, professor and chair of the department.

“I have long stated that our objective is to hire economists whose research has an impact not only on the economics discipline but also on important public policy debates,” Jensen says, pointing to several recent examples.

Assistant Professor James X. Sullivan helped shape the public debate when the U.S. Census released its latest poverty figures in mid September. Sullivan researches the consumption, saving, and borrowing behavior of poor households and how welfare and tax policies impact the poor. A paper he published in the December 2008 American Economic Review has been cited in congressional testimony on how to improve poverty measurement in the United States.

“Simply put, these poverty figures do not accurately identify those who are the worst off and fail to capture considerable long-term progress in our fight against poverty,” the editorial notes. “A better way to determine who is suffering from the current recession is to look at people’s spending, which includes things like housing, food, and other goods they are able to enjoy.”

A few weeks earlier, a study led by University of Notre Dame Keough-Hesburgh Professor of Economics William Evans, found that 1.1 million children may have been misdiagnosed with Attention Deficit Hyperactivity Disorder (ADHD). The study was featured on the Today show, on CNN, and in a variety of other media outlets.

“If we have a million kids misdiagnosed that’s a number we have to pay attention to,” NBC’s chief medical editor Nancy Snyderman said on the Today show.

The study, published in the Journal of Health Economics, concludes that some children may be mistakenly diagnosed with ADHD because they exhibit more immature behavior than older classmates and that more than 800,000 children may have received stimulant medication due only to relative maturity.

Late last year, research Kasey Buckles and Dan Hungerman published as a National Bureau of Economic Research working paper showed that women who give birth during the winter months tend to have less education and fewer means. The findings helped provide a new explanation for existing research showing that babies born in winter months are, on average, less educated, less intelligent, less healthy, and lower paid than people born in other seasons.

“Their discovery challenges the validity of past research and highlights how seemingly safe assumptions economists make may overlook key causes of curious effects,” the Wall Street Journal wrote about the duo’s findings.

The study by Buckles and Hungerman generated significant public discussion after it was featured in the Wall Street Journal, USA Today, and Popular Science magazine, and on CNN and the United Press International wire service.

One of the next projects to influence public policy may come from Jensen himself, who is collaborating with Notre Dame biology professor David Lodge on a $2.5 million, five-year study of the bioeconomic impacts of Asian carp and other aquatic invasive species in the Great Lakes. In the study, funded by the National Oceanic and Atmospheric Administration, Lodge and a team of biologists are working to predict the spread of these invasive species, and Jensen and a team of economists will use that data to calculate the resulting economic impact on the Great Lakes region and analyze the effectiveness of various policies to address biological invasions.