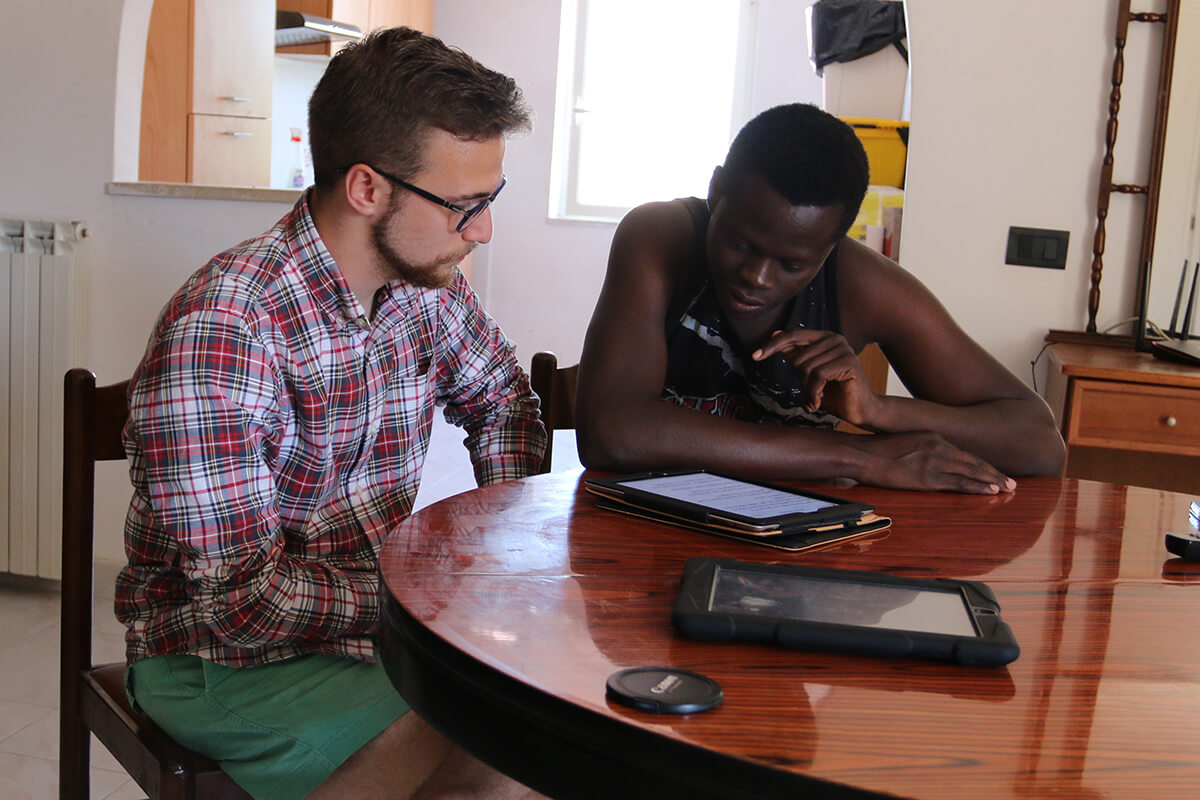 When Francesco Tassi arrived at Notre Dame, he was sure he would major in finance.

But a lecture on refugees set him on a different path — one that led him to travel through Italy for three months to study refugee integration firsthand.

Tassi, who was born in Italy and moved to the United States in third grade, traveled widely in high school and spent time living with host families in several countries. Those experiences sparked a passion for learning about and understanding cultures.

“Just by listening, I really started getting attuned to different issues in our world,” the senior said. “Seeing the connections and passion that some speakers channeled into their presentations made something that is so far away come home.”

“Just by listening, I really started getting attuned to different issues in our world. Seeing the connections and passion that some speakers channeled into their presentations made something that is so far away come home.”

After a lecture during his sophomore year, Tassi added his name to a list of students who wanted to talk more about the issues surrounding refugees. A group formed.

“One of the graduate students in the group said that he had a connection at the University of Eichstatt in Germany and that if we were interested, we could maybe apply for a grant and go,” Tassi said. “That was the first door that opened.”

Tassi, who was still planning on a career in finance at the time, received a grant from the Nanovic Institute to pursue the opportunity in Eichstatt.

“It was just a one-week experience, seeing this small German town and their experience with hosting mainly Syrian refugees,” he said. “But after that, I fell in love with research. That experience allowed me to be in a different context not only to discover new things, but also to interview people, to understand people, to ask the right questions. That, to me, was fascinating.”

To supplement his two Arts and Letters majors, Tassi decided to add a minor in international development studies, which requires students to spend six weeks in the summer after their junior year working in a developing country or with a developing population.

“My biggest takeaway from that first week in Eichstatt was that what we read in the newspaper and the reality of places can be very, very different,” Tassi said. “There are so many stories that just don’t get covered. And there are so many realities that are actually quite positive that don’t get mentioned.

“We tend to focus on large cities on these topics. The Italian local in the small town and the refugee or migrant in a small town are voices that are almost completely not heard.” 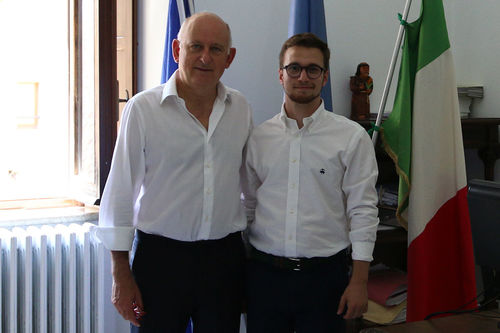 Tassi stands with an Italian mayor inside the town’s medieval castle. The mayor and other local officials banded together to form coalitions to offer support services for refugees.

Last summer, with a Kellogg grant and funding from Nanovic’s Vill Family Endowment for Excellence, Tassi spent 10 to 15 days each in six small Italian towns, studying the refugee experience from the Italian Alps to the beaches in Sicily.

Using his proficiency in several languages, he was able to interview and interact with refugees and citizens of the communities into which they have been temporarily settled.

“Before that summer I often thought about why I had learned French,” he said. “Well, it was so that in a small Italian town in the middle of nowhere I could speak and connect with a human being whose reality and experience influence dynamics that impact Italy, France, Africa, and the world.”

Tassi used his economics background to design a survey that measures integration into the community in new ways — for example, a feeling of belonging in small towns, friendship, and contact between local citizens and refugees.

Rejecting both an assimilationist and a multiculturalist strategy, he feels that building authentic community is the way forward for refugee integration. Tassi is sharing the results of his research with The System for The Protection of Asylum Seekers and Refugees (SPRAR), a government-funded program in Italy.

Tassi also discovered that many refugees in Italy could benefit from access to higher education, which is inexpensive, but they lack the knowledge of how to navigate the process. He related to this experience because of his own family’s relative lack of knowledge of higher education procedures after they immigrated to the U.S. 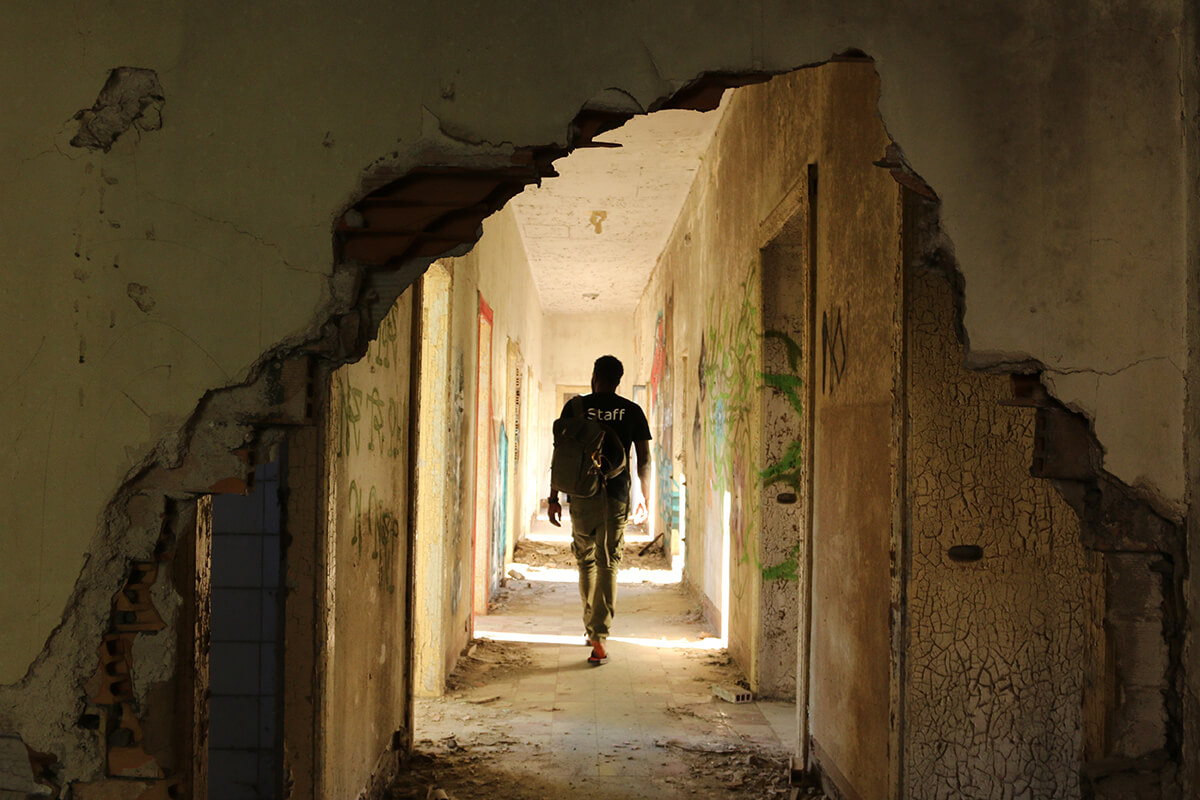 One of the refugees Tassi befriended walks through a now-defunct paper mill, a place he goes to clear his head. Too much worrying about the future is one of the greatest burdens for refugees, Tassi found.

Tassi plans to continue studying the integration of refugees and forced migrants after commencement — he is a semifinalist for a Fulbright research grant, could work for the Kellogg Institute in Italy, or eventually pursue graduate studies.

He hopes to work with the Notre Dame Global Gateway in Rome to coordinate assistance for refugees in gaining access to higher education in Italy.

As a senior looking back on his Notre Dame experience, he sees his sophomore year as a crucial moment when he had to choose the path he wanted to follow.

“In essence, my Arts and Letters education allowed me to realize what I am good at and find passion and meaning in my studies and the world, by making the world my classroom,” he said. “It was the lens that allowed me to focus and direct my Italian background, my languages, and my curiosity and love for understanding into a defined mission.

“This has given me purpose, direction, and meaning — all I could ask for in my few years here at Notre Dame.”

“My Arts and Letters education allowed me to realize what I am good at and find passion and meaning in my studies and the world, by making the world my classroom. This has given me purpose, direction, and meaning — all I could ask for in my few years here at Notre Dame.”

Originally published by Katie Boruff at al.nd.edu on February 14, 2018.