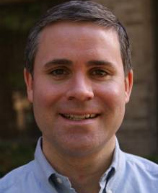 Associate Professor of Economics James X. Sullivan has been named a recipient of the 2010 Rev. Edmund P. Joyce, C.S.C., Award for Excellence in Undergraduate Teaching.

The Joyce Award winners, notes Vice President and Associate Provost Dennis C. Jacobs,  “are highly dedicated to undergraduates, often make themselves available outside the classroom, and always show a deep commitment to the learning, well-being and intellectual development of the students.”

A 1993 alumnus who joined the faculty in 2002, Sullivan says his own experiences as an undergraduate in the College of Arts and Letters left a lasting impression, and that William Leahy, an economics professor still teaching at Notre Dame, was a key mentor (see related story).

“Seeing how much he enjoys the classroom strengthened my own interest in teaching,” says Sullivan, who also takes inspiration from former philosophy professor T.V. Morris, known for breaking out his guitar and singing in class.

“Professor Morris was very entertaining, but it’s more than that,” Sullivan recalls. “The manner in which he conducted class was very conducive to learning, and because of that I brought more energy to the class as a student. If you can get students to come to class eager to learn, that’s half the battle.

“I was lucky to have many great professors when I was in college,” he says. “They taught me to be curious and to embrace the learning process.”

Sullivan carried that inspiration with him when he entered the Archdiocese of New York Teaching Program, similar to Notre Dame’s Alliance for Catholic Education. He taught global studies for a year at Mount Saint Michael Academy in the Bronx and then worked in a commercial bank’s economic research group in Chicago before heading to graduate school at Northwestern University, then home of the Joint Center for Poverty Research.

One key focus of Sullivan’s current scholarship is measuring poverty in the United States. He argues that using a consumption-based approach can produce a more reliable picture of changes in the poverty rate than conventional income-based criteria in part because the poor tend to receive income from many sources that are difficult to measure or are not calculated as income, such as food stamps and housing subsidies.

Sullivan is also expanding his research, using a consumption-based approach, to investigate whether gaps are widening or narrowing between the poor and middle class and between the middle- class and the rich.

In addition to his research and classroom teaching, Sullivan serves as advisor to the student economics club and mentors younger professors in the Department of Economics. He encourages the new faculty to focus on how they can best share their own excitement about economics with their students.

“Students are very receptive to that,” Sullivan says. “They recognize that you care about them and the material you are teaching—and they respond positively. On the most basic level, demonstrating to the students that you care goes a long way.”