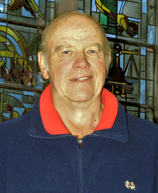 Success in life often starts with a great mentor. And Professor William Leahy has been that mentor for hundreds of Notre Dame students over the last several decades, building a reputation as an exemplary instructor whose commitment to students inside and outside the classroom has an enduring influence on their lives.

Chemistry, says the economist, is the key to creating a classroom environment that’s both educational and supportive of the individual.

“Life and academics are similar to sports in that they are about the ‘we’ and not the ‘I.’ Classroom teaching is a collective endeavor,” he says. “A sports team with chemistry will accomplish much more than one without it—the same is true for a class.”

At the beginning of each semester, Leahy organizes students into groups of two and has them interview each other about their lives. They then have to present this information about the person they interviewed to the rest of the class.

“This gives me basic information as to who these people are and a starting point to get to know them as people,” he says. “Additionally, each student gets to listen to all the others being introduced and to see each as individuals who bring a diverse background, and, thus, have unique perspectives and contributions to make.”

It is this keen focus on the needs of his students that helped earn Leahy a 2004 Sheedy Excellence in Teaching Award, an annual distinction given to a College of Arts and Letters faculty member for outstanding achievement in teaching and scholarship. The award is named after Leahy’s personal mentor, friend, and former teacher, Rev. Charles E. Sheedy, C.S.C., past dean of and professor in the College.

“He was a great teacher—stimulating, challenging, witty—and always led his students to seek the truth,” Leahy says. “From Father Sheedy, I was fortunate enough to receive certain guidelines and lessons I have tried to apply in my own teaching.”

Thinking of students as more than just pupils was one of the lessons Leahy learned from Father Sheedy. “We faculty have students in class for approximately 150 minutes per week; they spend most of their time in other roles,” he says.

Harry Alexander, a member of the 1966 national championship football team, recalls the impact of Leahy’s teaching philosophy. “On the gridiron, we called him Coach Leahy,” Alexander says. “He was an extension of the ‘on-the-field’ coaches, working hand-in-hand with Mike DeCicco as an academic counselor who made sure we stayed eligible. Coach Leahy cared. I know every teacher cares, but he truly goes that extra mile.”

Alexander says Leahy always knew exactly what was going on in their lives outside of their studies—and that concern continued after they received their diplomas. “He stayed with me until graduation and then kept in contact with me afterward to be sure I was still on track,” Alexander says. “We all hold Coach in high regard. He was and is the best teacher I’ve ever had.”

At the last team reunion, Leahy’s former students gave him honorary membership on the 1966 championship team because of the impact he had on their lives both during and after their time at Notre Dame. And his praise doesn’t stop there. Last year, recent as well as past students hosted a tailgate in his honor to celebrate his birthday.

“You saw and felt his enthusiasm for teaching and life,” former student Mike McCoy says of his favorite professor. “He made the study of economics fun. One of the best classes was during my senior year when Leahy divided us [in teams of] management and a grocer’s union to settle a strike.

“Anytime I return to Notre Dame,” McCoy adds, “he knows who I am and remembers me being in his classes. He always asks about how I am doing and how my family is doing. I believe he is an example of a true Notre Dame man and professor.”

James Sullivan, another one of Leahy’s past students, was so inspired that he followed in Leahy’s footsteps. He is now an associate professor of economics here at Notre Dame—and just won a 2010 Joyce Award for Excellence in Undergraduate Teaching (see related story).

“For Professor Leahy, teaching is more a hobby than a career,” Sullivan says. “He loves teaching Notre Dame students, and students recognize this immediately. His love of the learning process is contagious. He helps students see how what they’re learning in the classroom is relevant in the real world.”