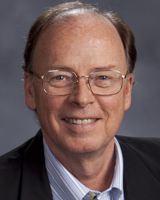 Richard Jensen is Gilbert F. Schaefer Professor of Economics, and has chaired Notre Dame’s Department of Economics since 2000. His primary areas of expertise are the economics of innovation, microeconomic theory, and environmental economics. Jensen’s research has been funded by the National Science Foundation, the National Oceanic and Atmospheric Administration, the National Bureau of Economic Research, and the Ewing Marion Kauffman Foundation. This fall, he shared his thoughts as outgoing chair and his hopes for the future of economics at Notre Dame.

College of Arts and Letters: You are wrapping up 13 years as chair of Notre Dame’s Department of Economics. What are you most proud of?

Jensen: Well, there are a great many things I’m proud of. But I think the thing I’m most proud of is having brought world-class education to undergraduates here at Notre Dame.

AL: What are some of the most significant changes in the undergraduate program?

Jensen: The growth in the number of majors has been astronomical. When I came here in 2000, there were only 130 majors. We now have 460 economics majors, which is an increase of more than 250%.

I think everyone knows that since the recession there’s been an increase in the number of economics majors across the country. However most of the growth in economics majors here at Notre Dame, fully one-third of it, occurred in the academic years 2005-06 and 2006-07. The reason that’s significant is that the fall of 2005 is when we increased the rigor in the program to match those at the other top 20 universities, requiring calculus for intermediate theory courses and requiring econometrics. And the biggest growth in the major occurred in the next two years, after those changes, but before the recession.

We’ve also introduced an honors program and assisted in the creation of two new undergraduate programs: one is the major in international economics that now, despite the fact that it’s only in its first year, has 66 majors; the other is the business economics minor, which in its second year has 178 Arts and Letters students enrolled.

AL: What other results have you seen from these changes in the undergraduate program?

Jensen: Our students now, because they’re better trained, are doing very well in the job market. Our placement record is virtually 100%. The year before last their starting salaries were as high as those students graduating with business degrees. And we are now routinely sending two or three students every year to some of the top five or 10 graduate programs in the country.

AL: The number of majors isn’t the only thing that has grown over the past decade or so. Hiring more—and more outstanding faculty—has also been a big part of your role as chair.

Jensen: Between 2002 and 2012, we hired 23 regular faculty and two special professional faculty. And just to give you an idea of the quality, four of those were endowed chairs, including the first Keough-Hesburgh professor on campus (William Evans). We’ve also hired four college chairs including one (Joseph Kaboski) who won the Frisch medal last year. Moreover, eight of our colleagues are research fellows or associates of the prestigious National Bureau of Economic Research.

AL: And you have several more hires on the horizon?

Jensen: Last year the University held a competition as part of the Advancing Our Vision [AOV] strategic hiring initiative. We were very fortunate in the competition, which will allow us to hire 15 new positions beginning in the fall of 2015, including four new endowed chairs, three full professors, and three associate professors. We are, of course, extremely grateful for that support. Our plan is to hire the highest quality faculty we can in those positions and therefore move up into the Top 25 in the rankings.

Jensen: That is ambitious, but it’s no more ambitious than coming from nowhere, from the fourth quartile, to the top 40 in 10 years, which is basically what we’ve done.

One of the things I’ve always said here is that the goal wasn’t simply to increase our rankings, but to provide excellence in research and teaching. Once you do that, the rankings will follow automatically. And they did.

AL: You also re-launched the graduate program in recent years. How has that gone?

Jensen: When I came here there were about 20 students and the average completion time was about 8 years. The graduate school decided to shut down the program. It was then restarted in the fall of 2006, a wholly new program, one we revamped every bit as thoroughly as the undergraduate program.

And since then, the average time to completion is less than five years. We’ve had 16 people graduate, 14 of them in 5 years and 2 of them in 4 years. All of them—100%—have found full-time employment. Nine of the 16 are at tenure-track jobs and another two have research-oriented jobs in the Bureau of the Census and International Monetary Fund. The others are all working in research positions with think tanks. We’ve placed everybody. They’re getting good jobs.

AL: What are the department’s greatest strengths?

Jensen: The department’s greatest strengths now, I think come directly from the strategic plan we’ve had to build this department from the start, which says: “The primary mission of the Department of Economics is to provide high-quality research and education in economics. This requires that the faculty conduct nationally and internationally recognized research that increases their understanding of economic phenomena in a way that allows the university to inform the important policy debates of the day.”

We are focused on economic analysis of issues related to social justice while helping the university assume an acknowledged position among leading research universities. That’s been our vision from day one and it continues to be our vision for the future.

The strategic plan points out that the department will be able to fulfill these goals only by attracting and retaining the right faculty. What I have done from the beginning is to look for excellent researchers who not only publish in the best journals, but bring their research into the classrooms.

I think it’s highly significant that some of our honors students have actually had their honors theses published in peer-reviewed economics journals. And that’s because the faculty that we brought on board here not only care about doing research but care about teaching their students what they’re doing as well.

AL: The department had an external review in spring 2013—the first since 1997. What did the outside experts have to say about the state of economics at Notre Dame?

Jensen: I think the best way to summarize their views is in the first paragraph of the executive summary. They state: “What has happened to Economics at Notre Dame since the current department was created in 2003 is a minor miracle. The trajectory of growth and improvement exceeds even the most optimistic forecasts from the early 2000s. The complete rebuild of an Economics Department, essentially from scratch, in one decade is virtually unprecedented in the profession—and doing this with a plan so coherent with the University’s mission makes the accomplishment all the more spectacular. It is a credit to the faculty in the department, and particularly the chair, that this change was accomplished so rapidly and visibly within the profession.”

Beginning in July 2014, William Evans, The Keough-Hesburgh Professor of Economics, will serve as chair of the department. Evans is a research associate for the National Bureau of Economic Research, a faculty fellow in the Kellogg Institute for International Studies, and the director of research for the Ford Family Program in Human Development.

Originally published by Arts and Letters at economics.nd.edu on January 13, 2014.